At the time being, our Newsletters are in French only.

On request, we may send a translation. See “Contact us”

Thus competitiveness-price is recreated and the margin restored enabling a future.

This economic model combines both small volumes and cost reductions!

DO YOU WANT TO HAVE THE CAKE AND EAT IT ?

Only breakthrough innovations will enable us to beat the crisis

Petition for more value(s) in public and company decisions

The signatories(1) are calling upon the sense of responsibility of  economic, administrative and political leaders that they conclude upon the following: within a sustainable context of resource shortages, snipping budgets without changing our practices shall only lead to more suffering and to new sacrifices.

The threatening decline is not inevitable

This goes through a change of vision and method

To read more and sign the petition … because it is urgent and very important !

Consuming less to earn more, the truth about the economic crisis

What if the crisis, that we have been told 10 times to be over, could not be over so long as we don’t question it for what it is?

If the solutions found so far do not work, it is because they are not consistent with the true causes of the crisis.

The post-war boom ended with the first oil shock in 1973. The second in 1979 intensified the effect. It was too hard, and caused, for its initiators a counterproductive effect, because by weakening the occidental economies, the price of crude oil plummeted, creating a counter oil shock. Strengthen by energy-saving measures of all nature, this counter shock gave the illusion that deep structural reforms could be avoided and on the contrary, the economic model in use could be maintained.

The forecast of the book “The Key to renewal thanks to the crisis” validated by the news!

A renewal of strategic and competitive criteria is occurring

The derailing of Lean management : a subject of reflection!
How to overcome the crisis !
Not by listening to those who claim that the crisis is behind us!

Let’s take the right option ourselves!

2013 shall be very difficult, but the solution exists for a new cycle of growth!

With functional economics, reduce by 50% your energy and natural resource bills!

No miracles on the other side of the world!

No miracles on the other side of the world!

The exotic markets shall cease to emerge. Our dependency on energy and raw materials is going to become even more critical.

Why do we need a new economic model?

For at least 5 reasons:

In what does functional economics answer our needs? 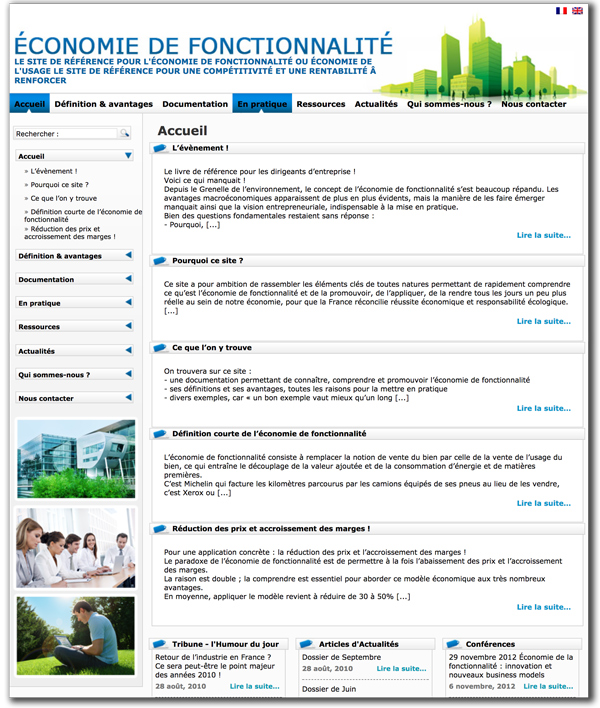 At Sefior,
we have no preconceived idea,
we listen, observe, reflect,
we are looking for the relevant data, key factors of success,
we know economic models and breakthrough business models,
for collected data ;
only the added value motivates us, as well as the indispensable balance between the short, medium and long term, without which there is no resilience.

Eric Fromant , founder of SEFIOR, has a dual background: scientist (doctorate in chemistry-biochemistry) and management (Executive-MBA HEC), he worked for 10 years in the CEN (European Committee for Standardization ) and led for 30 years, in an international context, companies in the field of biology and chemistry.

There are no upcoming events at this time.